While sitting in the nosebleed section of the Mesa Arts Center Theater a few nights ago, I had a fantasy.  I fantasized that the man who was playing was not dozens of rows and hundreds of feet away and below on a vast black stage, but that instead he was sitting right in front of me.  He was playing the same song, same notes, same inflections, but he wasn’t so far away.  He was close. I could see his fingers individually, I could hear his breath between chords, and I could smell his cologne.

Tuesday was not a normal day.  As far as extraordinary days go, Tuesday was right up there.  It is not often that Paco de Lucia comes to Arizona.  It is not often that he brings artist the likes of Duquende  and Farru with him.  It is even less often that someone like Farru would offer a workshop to a group of just 10 people in a small studio in Arizona, and that he would take the time in that studio to teach us what he personally believes flamenco is.  Yet, that is exactly what Tuesday was like for us – that and much more.

On Tuesday morning, with a green towel draped around his neck, Farru stood unimpressively in front of a group of students. He premised the class by declaring that he didn’t consider himself a “Maestro del Flamenco.”  He spoke patiently and calm, and it was his quietness, along with this startling comment, that captured the ear of everyone there. His reason was simple:  in his life so far, he didn’t have to do much of anything to become a flamenco artist – he just had to be born. Farru remembered waking up as a child, sucking on his pacifier, and walking into the living room to see Paco de Lucia playing his guitar.  From infancy, the most important flamenco artists in history had come to his home on a regular basis, and he simply sat by, listened, watched, and suckled.  He said in that particular situation, who wouldn’t become flamenco?

I often wonder what life would have been for me if I had grown up in a flamenco family.  In a way, I was wondering that while fantasizing that Paco was playing his guitar - not in a thousand seat theater, with me in the third to last row - but in my presence, close.  Very often, I feel so far away from flamenco.  Even when I get to shake hands with someone as admired in the flamenco world as Farru, there is something left wanting.  I so badly want to communicate, but I don’t have the words.  Perhaps my expectations are too high, or perhaps it is a childish desire, but the truth remains that  “Los Maestros” are far away, and they don’t know me.  I have been literally surrounded by them before, and yet I was invisible.  Did I make myself invisible?  And if so, can I make myself visible instead?  In the middle of flamenco, I’ve known that I was right where I was supposed to be, even while I knew I didn’t exactly belong.  The feeling has made me wither before.  It has made me feel a unique kind of loneliness – a special kind of isolation.  I guess this feeling is true for anyone who has one foot in one culture, and the other foot in another.  Though at times a struggle, it really is a special place to be.

Here in the states, it isn’t hard to feel a bit alienated when it comes to flamenco.  Sure we can visit Spain.  Sure we can watch flamenco YouTube videos for hours on end.  But we Americans simply don’t have the convenience of living in the cradle of flamenco.  There is a vast ocean and (for some) an even vaster body of land between us.  And yet there is such a strong desire for many of us to be accepted as legitimate flamenco artists and to share fully in the inheritance of the culture.  But perhaps we don’t fully appreciate the beauty of watching flamenco from afar.  Perhaps, as Farru seemed to suggest, there is an honor in becoming an artist because one actively seeks out flamenco.  Indeed, that is exactly what Jason and I did when we bought our tickets, took the day, drove one hundred and five miles and walked into the concert hall with everyone else who sought out flamenco too.  In fact, we were necessary parts of flamenco that night.  Paco wouldn’t have been in that theater without an audience, so we all had our parts to play.

And it turned out that we were all so incredibly rewarded in our roles.  Paco and his troupe of artists (all notable in their own right) made music that could magically transport us all, even if just momentarily, into a close-knit flamenco family.  When I listened, I was neither far away nor anonymous.  When in my wild imagination I saw Paco close-up, I wasn’t estranged.  How does flamenco do that? Regardless of what the answer may be, for than one and half hours of time – a time so seemingly insignificant in commitment - we were all blessed when we listened. Listening allowed us to take part in the harmony.  And who knows?  Maybe even Paco fantasized someone to be near as he played, someone whose far-away whispered oles he could subtly hear.

Of course after those moments in concert, the harmony was replaced with clamoring once again, and as we stepped outside the theater the air was warm, but the sun was long gone.  Though we didn’t see Paco again, at the restaurant across the street from the theater a tablao was presented and most of the other musicians from the troupe came for dinner.  The flamenco that could be presented for those great artists in return was your basic American fare, but Farru himself, was most gracious.  I learned something from him, not just in the studio, but in real life that night when he humbled himself (artistically speaking) to play guitar for the least of us.  In that graciousness, he didn’t act foreign and he didn’t treat us as foreigners.   In my guilt, I realized that I am usually far away from flamenco because I have chosen to be.  Most often, it is because I’ve crawled into myself and have made the focus my own insecurities.  But just maybe if I were to focus on others, to think of serving them instead of myself, to think of their feelings before my own, then I might find that flamenco is no further away than the person standing right beside me.  I’m grateful for this lesson. 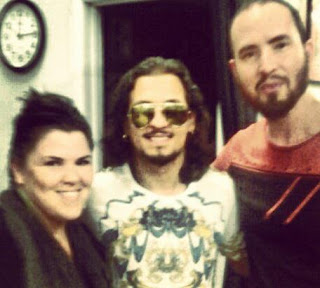 As each has received a gift, use it to serve one another, as good stewards of God's varied grace ... 1 Peter 4:10
Posted by Jason and Mele Martinez at 11:21 AM